The Shipyard and Machine Factory Janssen & Schmilinsky was founded in 1858 in Hamburg Steinwerder. It was on eof the main yards to build the typical Harbour Tug. In it's 70 years history the shipyard build more than 200 of it.

In 1913 a Steam Tug tbn "Schulau" was delivered to the barge company J.H.N. Heymann, as stated in the original certificate of registry. 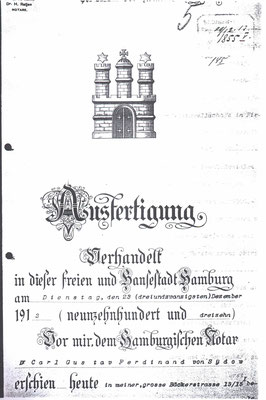 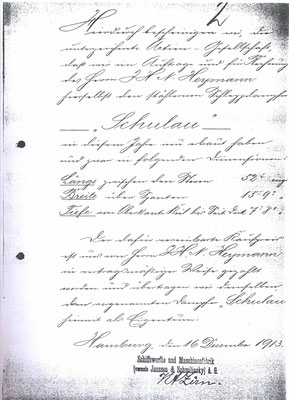 'We hereby certify as the undersigning stock company, for the account and invoice of Mr. J.H.N. Heymann himself, the steel Steam Tug "Schlau" was build in this year...'

'The agreed sum was payed to us by Mr. Heymann as per contract. As herewith we deliver the steamer "Schulau" to his ownership.'

(translation to match the original style of the document)

The tug was painted with green/black/ yellow stripes on the funnel and was named after the Schulau sugar refinery as Heymann had a contract with this company.